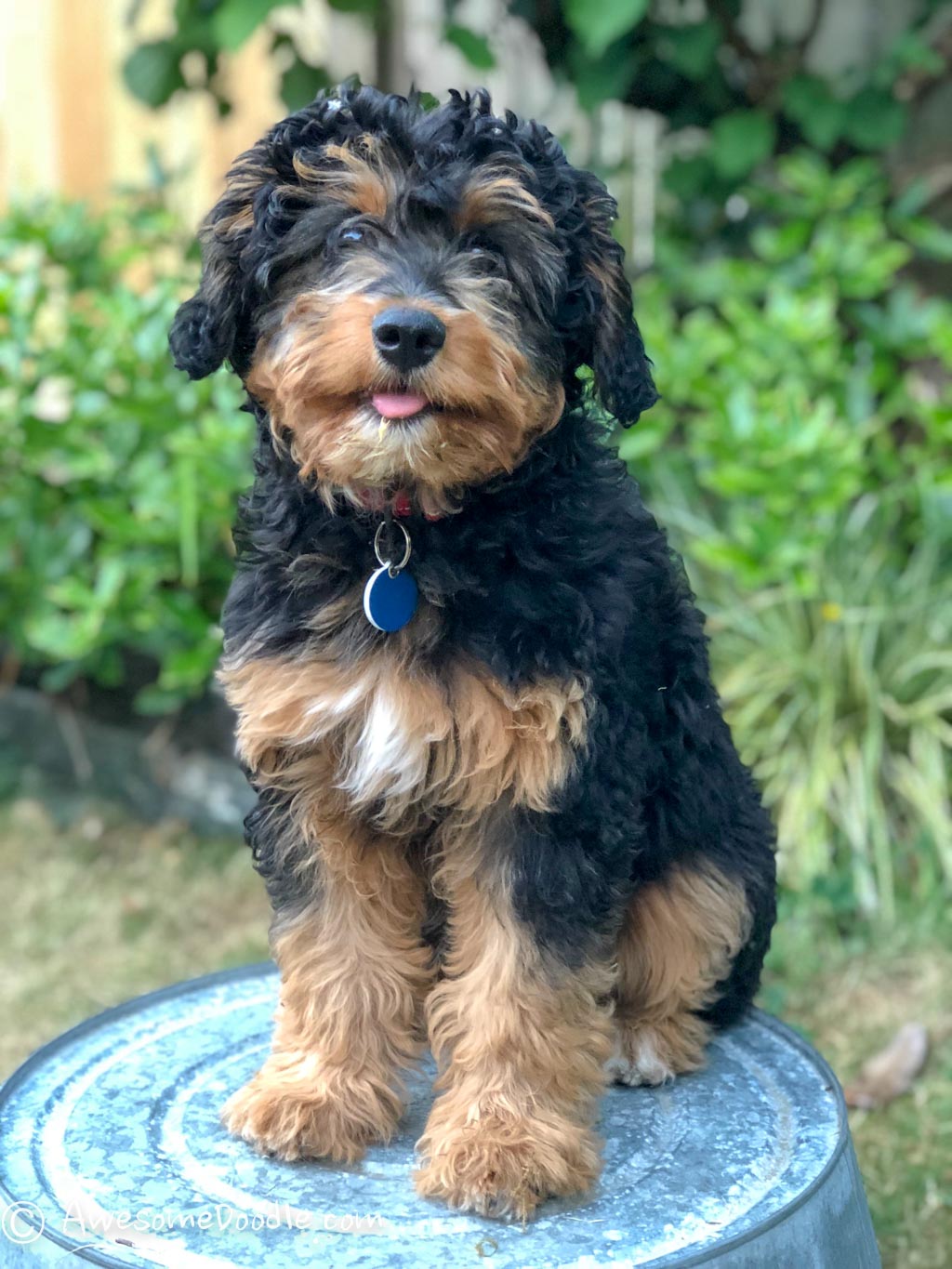 Want to hear what people are saying about their AussieDoodle Puppies from AwesomeDoodle AussieDoodle Breeders? Click here to see real Aussie Doodle reviews.

When it’s time to pick your new little baby, you’ll want to know what it will look like when it matures. When our AussieDoodles go home with their furever families, we keep in touch with all of them. They send us photos of their AussieDoodles when they grow up and we post them on their dedicated web page here. Here are just a fraction of the photos of adult AussieDoodles submitted to us by our families.

“Smokey is growing to be such a fun, happy, healthy puppy at almost 7 months of age. He has completed two training classes, the basic and intermediate in which he did well and earned his certificates. Now that he has had a break and is through with his cone, we will get him signed up for the advanced training class. He loves to fetch the tennis ball or the frisbee, wants to chase the squirrels  [read more]

Finley is quite the friendly, energetic, goofy pup. She loves going on adventures, but also loves to snuggle. She is the perfect travel companion and in 8 months has visited Yosemite National Park, Chicago, Park City, Wyoming and Massachusetts! She completed entry level puppy classes and the AKC Canine Good Citizen class. She must wait until she is 1 year old to take the official test. Finley loves to tag along on our trail runs, [read more]

“Kirby is 15 pounds of pure “HAPPY” at almost 11 months old! I have had happy dogs before, but he tops them all! Everyone who meets him sees it. He’s so stinking cute too!  Because he is so smart (and adores me) training has been great! He can do a 5 minute sit-stay – even in a store or with other dogs wondering all around him. He comes at ”Look!” every time… even the dog [read more]

"We have had CJ almost 8 months now and everyday is an adventure. He will be 1 year old March 8th, and is about 14 pounds. He enjoys visits to our condo in Panama City Beach, Fl, our mountain home in Blue Ridge, Ga and our permanent home in Louisiana. His favorite thing to do is ride with me in my pick up truck and riding in the utility vehicle in Blue Ridge, Ga.  Attached [read more]

Miki is a blue merle female aussiedoodle. She has some copper coming out on her eyes and legs. She has a big white chest, white on her face, white legs and an adorable white-tipped tail. She's gorgeous! We think she will look like Sadie or Fen as she gets fluffier. Miki's parents are Cali & Gator. We expect her to be 15-25 lbs full grown. Congrats to Peggy, Chelle, and Zoe in Florida.

Milo is a blue merle male aussiedoodle. He has high contrast merle markings with copper coming out on his legs and face. He has adorable white paws, white on his chest and face, and even a cute white-tipped tail. He's so handsome! We think he will look like his older brother Wally as he gets older. Congrats to Chris and Mimi in Connecticut.

“Hi All! Lucca has been the most wonderful addition to our family!   He has a four year old big sister Golden Doodle, named Presley that he adores.  They are never far from each other.   Their playtime consists of tug-a-war with anything the other one has, or chasing each other around the entire house thru the doggie door and all over the backyard until they are exhausted.  Then they end their chase by cooling off (no [read more]

"Ollie is doing great!! He graduated from the puppy basic course 2 weeks ago and we are 2 weeks into the intermediate course. I attached his graduation picture and 2 videos from yesterday showing off how smart he is. He doesn't like to do tricks for praise or toys. He seems to be very food/treat driven. We seem to have potty training down and he is continuing to lose his baby teeth. We are very happy about that and I think our other 2 dogs are as well. Ollie is a very happy puppy. He likes all people and dogs . So far the only thing he doesn't like is his leash but that continues to improve as well. Overall we are all very happy with family. I think we were meant to be his parents, we love him so much!"

Elsa is a blue merle female aussiedoodle. This little girl has classic blue merle markings with cute dark merle patches around her eyes. She has lots of white on her face, legs and chest. She's so adorable! We think she will look like Hudson or Boomer as she gets fluffier. Congratulations to Etai and Anya in New York.

Matilda is a blue merle female aussiedoodle. She has perfect bold blue merle markings and a little white on her chest, paws, face and tail. She's so beautiful! We think she will look like Brombie or Gracie as she gets older. Josie's parents are Faith & Cash. Congratulations to Jason and Ashley in Ohio.

Lucy’s dramatic copper markings and blue eyes turn heads wherever we go. She’s so friendly, too. Her personality is just as beautiful as she is. We love that she’s both fun and cuddly. Lucy is eager to learn and has known “sit”, “eyes”, “lay down”, “rollover”, and “stay” since she was twelve weeks old. By the time she was 15 weeks, she would sit at the door while I opened it and wouldn’t cross the threshold until I said, “Okay!” Now, I can place her breakfast in front of her, tell her “leave it,” and she won’t go to her dish until I release her. And her classes for basic training don’t start for another week.

Tucker is a black and white bi color male aussiedoodle. It looks like he has some tan/copper markings coming out on his face and legs. He has a lot of white everywhere on his face, neck, legs and chest. He is so handsome! We think he will look like Hobbs or Bailey as he gets older. Congratulations to Lisa and Jeff in Texas.

We are very happy with our Benji. He’s sweet & likes being with us as much as we love being with him. Benji is is very intelligent. We are still training him and responds very well. He likes being in our fenced in yard & is very busy chasing squirrels or watching the neighbors. Barks at cars so difficult to walk around the neighborhood with him. He plays with other dogs well & loves playing [read more]

Argos is doing great! He’s such a wonderful puppy. He’s fitting in perfectly. The love and changes he has brought to our lives is indescribable with each passing day. We are all adapting wonderfully. He’s simply awesome!!!

"Ollie is a great pup and we adore him. We were on a hike here and he was having a ball. Not so much when we got home and I had to comb about a hundred burrs out of his fur, but amazingly, he was even patient and wonderful for that." - Beth

“Halo loves to play catch with her frisbee and / or ball.  She is built for speed and super quick.  She’s also very clever and learns new commands easily.  She’s crate trained and still sleeps in it every night.  Halo’s extremely affectionate and most of all, she loves just to be with everyone. Please say ‘hi’ to Tom for us.  He did a great job raising her for her first seven weeks!” – Deb [read more]

Finn is a blue merle male AussieDoodle. He has the classic Aussie blue merle pattern, but with a really unique copper/cinnamon undertone to it. His white markings on his face, chest, and legs are so adorable! We haven't had a pup quite like Leonard before and we're excited to see his fur as he grows. Congratulations to Kathryn and Kristine in Virginia.

"Happy Fourth of July from Bhakti!! He is 5.5 months and 38 pounds. He’s doing great! I think he is starting his rebellious teenage stage."

Yuki is a black bi color female aussiedoodle. This little girls white markings are perfect - including a full white collar and tons of white on her legs and face. She's adorable! We think she will look like Hobbs or Bailey as she gets fluffier. Congratulations to John and Ruby in California.

Toulouse is a red bi color male aussiedoodle. He has tons of white everywhere on his paws, tail, face, and a huge white chest. He's so handsome! We think he will look like Harley as he gets older. Congratulations to Karen and Jon in California.

Marlowe is a red merle male aussiedoodle. He has that classic red merle look plus a beautiful white chest and a little white on each paw too. He's perfect! We think he will look like Ginger or Daisy as he gets older. Congratulations to Traci and David in North Carolina.

Louis is a red bi color male aussiedoodle. This little boy has a very unique apricot red color with tons of white everywhere. He is so adorable! We haven't had a pup who looks quite like Louis before so we're very excited to see him grow and get fluffy. Congratulations to Jodi and David in California.

"Everything is going great so far.  Blue is better than we ever could have imagined. He is the cutest and very smart.  We are loving him so much." Blue is a dark blue merle male aussiedoodle. He has a big white chest and a little white on his chin and paws. So handsome! We think he will look like Ned or Nash as he gets older. Congratulations to Julie and Greg in New Jersey.

Woody is a red merle male aussiedoodle. His merle patterns are high contrast and bold. We love it! So handsome! We think he will look like Tilly or Miss Daisy as he gets fluffy. Congratulations to Peter and Tracey in California.

Akila is a blue merle male aussiedoodle. He has high contrast merle markings, bright copper on his face and legs, and a little white on each paw. He's perfect! We think he will look a lot like Aspen or Rory as he gets older. Congratulations to Leo and Claudia in New York.

Akila
Load More Posts
1234567Next
We have available AussieDoodle puppies
Show Me!