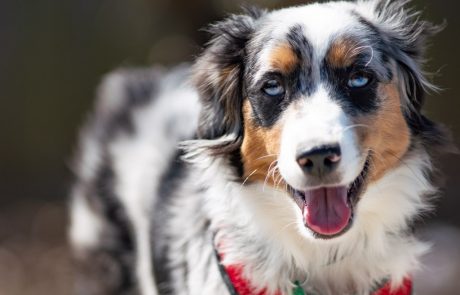 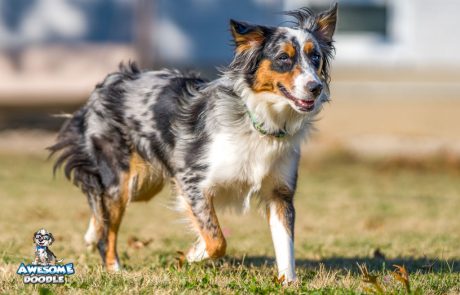 Darla puppies are raised by:

Thank you for the ongoing support.  Cinnamon Bun is doing well!  Things improved once we got her final parvo shot series and we could get her outside.  She enjoys fetch and is super fast.  We have figured out many teething things (e.g. crushed ice, freezing a wetted rope, etc.), ways to get her tired, have her learning loose lease (ok, we are starting).  There are challenges (waiting for preferred things like going out, some zoomies, etc.).  On balance we are making much more progress than having challenges.  She is [read more]

Congrats to Sarah from Pennsylvania on her new puppy Koda! Koda is a phantom blue merle male mini AussieDoodle puppy with stunning copper accents and a beautiful merle patterned coat. He has so much white chest and belly, and little spots on each paw, nose and forehead. His phantom copper markings and white areas remind us of this handsome guy S’Mores. You won’t want this little guy to ever leave your side! [read more]

At eight weeks: Java has been 100% with her litter box. Had one #2 she got on the side of the box, but overall, she totally understands her box and has since right away. We praise her every time she goes that we see.  She is already in love with her crate, it was almost instantaneous. We introduced her the first afternoon and took a 2 hour nap in it right away. It’s her safe space and have worked on closing it during the day and leaving the room. [read more]

Things are going great with Piper (Darla/Humphrey), she is now, at 17 weeks, pushing about 20 pounds, all snuggly, feisty and sweet!  We have been fairly steady with training, has full knowledge of the standards, sit, come, down and all combinations, knows her name, has good recall, and the crazies are becoming a thing of the past. She loves fetch, we try to really run her every day, this helps with both appetite and lessening of mouthiness (still working on that). We are working with a trainer in weekly [read more]

One week in and Kona is doing great! She got a clean bill of health from the vet, is eating well, sleeping without protest in her crate, is learning several easy commands, and using the litter box like a champ. We’re working on the transition to outdoor pottying too. The puppy crazy time is frequent and hilarious. Sometimes hard to distract her with toys, so that’s a work in progress. I think my favorite thing is to see her quietly observing us from her fenced off area of the [read more]

Congrats to the Callen Crew on this lil cutie. Sydney is a black phantom female mini AussieDoodle puppy with beautiful copper markings. She is a dainty little peanut, we can’t get enough of her. We think she will look a lot like her half brother Chase as her curls grow in. This little sweetie can’t wait to be by your side! [read more]

Congrats to Lori and Eric from Denver, CO on this striking puppy. Bones is a black phantom male mini AussieDoodle puppy with vibrant copper points, including a full copper muzzle. Don’t you love his little white chinny chin and the stripe down his chest? We think he will look a lot like his half sister Winnie as he grows his fluffy curls. He is a stunning little lad and is ready to be your new best buddy! [read more]

Congrats to Josh and his family on this litter rascal! Winston is a black phantom male mini AussieDoodle puppy with bright copper markings on his legs, face and little bum. He has one adorable white paw!  We think he will look a lot like his big brother Bear. This is your new snuggle buddy right here! [read more]

Wally has been great and we are absolutely in love with him. Thank you so much for giving us such a wonderful addition to our family. At 8 weeks old, so far he has only had 2 accidents outside of the litter box and those were when we first got home and he wasn’t 100% sure where everything was yet. He is such a quick learner that he will even try to go to the bathroom if you ask him to when its close to bedtime. This morning he [read more]

Congrats to Scott and Meg from OH on this handsome boy! Ozzie is a black phantom male mini AussieDoodle puppy with rich copper markings and an adorable big white patch on his chest. We think he will look a lot like his older half sister Bella as he gets fluffier. What a little charmer he is! [read more]