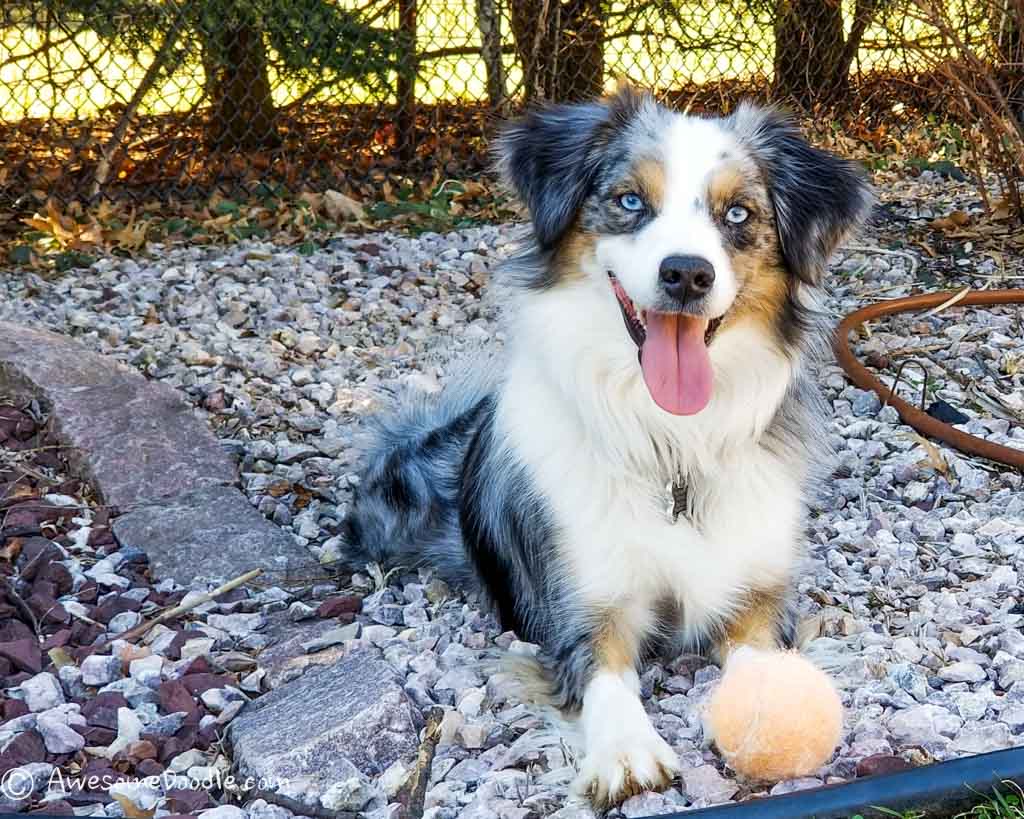 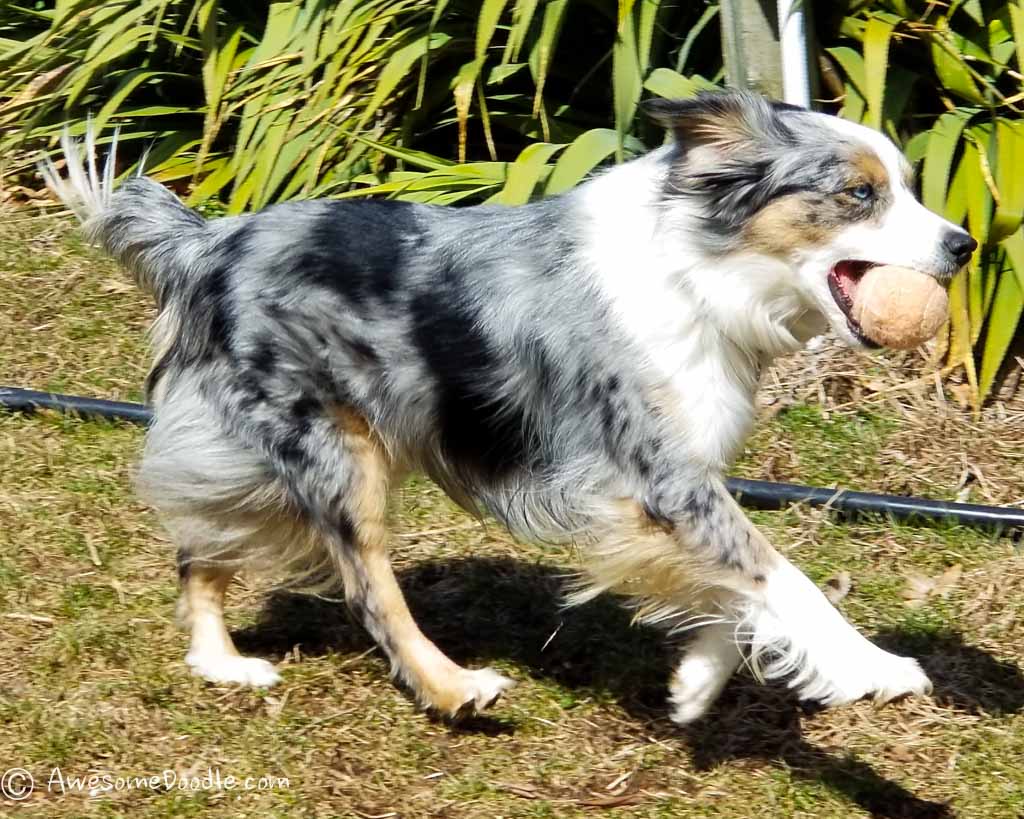 Dani, the Super Aussie puppies are raised by:

Dani, the Super Aussie's Past Puppies:

Teddy has been home now for five days and has settled in really well. He and Hank hit it off right from the start. Teddy was never in to the litter box and since we are home all the time, we went right to house training. He does his business the second we get outside almost every time we go out. He also pees in the house if that’s where we are when the need arises. Of course, he hasn’t peed in his crate or pen. He copies Hank [read more]

Julio has been adopted by Beth and Brian from New York. Congratulations on your new boy! Julio is a red merle male AussieDoodle puppy with a white collar and rich copper points. We love the vibrant shade of his merle coat and his big white aussie blaze on his forehead. We think he will look just like his big bro Jeter as he gets bigger. He is a remarkable the little lad! [read more]

Ace has been adopted by Kristin who lives in Brighton, MI. Congrats to Kristen on her new little guy Ace! Ace is a black tri colored male AussieDoodle puppy with lots of white and copper trim on his legs, cheeks and little bum. We love the his copper eyebrows, they will become more defined as he grows. He reminds us of his big bro Bandit. Such a striking little lad! [read more]

Things are going well.  At 8 weeks, she is 100% using her littler box. She sleeps in her crate at night. She fusses for a few seconds but then she’s quiet all night until we set her free in the morning :)  I ordered one of those grass patches to starting using right outside our back door. We have a several large steps. She’s so tiny that I would like her to just get used to going out the back door and using the grass to do her business.  [read more]

Congratulations to Jennifer and family from NJ on this perfect little boy! Boomer is a blue merle male AussieDoodle puppy with a big white collar and soft copper accents. We love the big white hourglass on his face and his cute little white paws. We think he will look a lot like his half sister Miki as he grows and gets fluffier. This little guy is just irresistible! [read more]

Congratulations to Penelope from Delaware on her new sweetie Hank! Hank is a blue merle male AussieDoodle puppy with a white collar and decorative copper marks. You have to love that big white belly and his perfect aussie hourglass and muzzle, just like his mamma! We think he will look a lot like his older sis Olive as he gets bigger. What a little charming doodle boy! [read more]

Brady’s new home will be in New Jersey with Cindy and David! Congratulations on this cute little peanut! Brady is a blue merle male AussieDoodle puppy with a white collar and bright copper points. His entire underside is white and we love his little white socks!  We think he will look similar to this beauty Blanch as he gets bigger. He is just darling! [read more]

Congrats to Lois and Mike. Marli is being held back to be a future AwesomeDoodle mom! Marli is a beautiful blue merle female AussieDoodle puppy with a white collar and copper accented markings. As she grows and gets fluffy, we think she will look a lot like her big sis Lola. Such a little sweetie pie! [read more]

Jeter is a red merle male aussiedoodle. He has a full white collar and tons of white on his face, chest and legs. He might have some copper coming out on his face too. He's so handsome! We think he will look like Quincy or Indie as he gets older. Congratulations to Debra in Connecticut.

Rigby is a red merle female aussiedoodle. This little girl has the cutest dark patches in her merle coat.  She has a big white chest and a lot of white on her legs, face and chest. She might have some copper coming out on her face and legs. She's gorgeous! We think she will look like Finley or Luna as she gets older. Congratulations to Nicole and Chris in Florida.

Lexie is a red tri color female aussiedoodle. She has a perfect white collar and tons of white on her face, chest and legs. She has copper coming out on her face and legs. She's gorgeous! We think she will look like Kirby or Jax as she gets fluffier. Congratulations to Jean and Don in Florida.

"I cannot get enough of Olive (Dani X Gator, 4 months)! She is so unbelievably perfect. We started a tricks class at our local training club today and the instructor raved about her and used her for demos. She even said she was so cute she should do commercials! 😂 I knew y'all could appreciate that since all of our ADs are the best pups in the world!"- Michelle