Congrats to: Chris & Katie in New Jersey on this Boy, Finley.

"Hey AwesomeDoodle team! Katie and I would also like to take this opportunity to say THANK YOU to every one of you and your families, who clearly not only support what you do but take part in raising these amazing puppies.  It is abundantly clear how much effort you put into your work and how much genuine care you put into raising our four legged family members.   Finley is an absolute joy.  He is everything you claimed and so much more, he has a wonderful personality even at this young age, and it's amazing to watch him continue to develop!  He's incredibly smart and ridiculously handsome.  Watching him learn brings endless reward, and your continued support and resources are such a huge help.   The AwesomeDoodle team are not just breeders, what you're doing has an immeasurable ripple effect.  We feel it every morning when we excitedly get out of bed and are greeted by our tale waggingly happy and affectionate pup.  We see it every day with huge smiles on the faces of family, friends and strangers who have the opportunity to meet Finley.  From the bottom of our hearts, thank you!  We appreciate all you've done and continue to do!  Keep those tails wagging!" "Our little man is growing so fast!  At 12 weeks vet visit (last night), Finley weighs in at 14.8 Lbs!.. though I think he's got a couple Lbs in fur he's about to lose.  His coat is so adorable, but summer is finally kicking into gear, so the fur has got to go! And we can't see his eyes! He seamed to adjust very quickly to his new home.  The only sleepless nights were the first two as we all normalized our schedules after a 14 hour drive, which by the way, he was amazing for.  He went a little crazy twice, and it quickly became clear that he was saying "I gotta GO POTTY".  We stopped then and he was fine.  For the most part, we stopped every 1.5 -2 hours at churches and school yards to go potty and play for a bit.  Other than that, he slept on the floor or cuddled up to whichever of us were in the back seat, chewed toys and happily explored the seat and floor. Since then, he's proven over and over just how incredibly smart he is... and also reminded us a few times that he's still a baby with ADD .  So, what does Finley know?  Well, when distractions are managed, he knows and responds to his name, sit, wait, come, leave it and down.  At the height of excitement and distraction, he still clearly knows his name, but kind of gives a look that says "what do you have for me... is it better than what I'm going after?!" He plays fetch pretty well, and is just beginning to recognize balls and frisbees above his head... so I'm hoping we can start to teach him to catch a soft frisbee in a couple/few more months.   Just recently, he's starting to tell us when he has to go outside by sitting by the front door!! We're so excited! We put the bell back up so we'll start bell training again. We've had limited accidents otherwise and it's all been our fault either because we weren't fast enough or weren't paying attention to signs.  He's doing GREAT with crate training. He's grown out of the first little one! We have 2 large crates with dividers to fit: one in the living room and one in the bedroom. He doesn't love the one in the living room but he doesn't fight it either at nap time or when we go out.  When it's bedtime, we all go upstairs. While we get ready for bed, Finley chews on some toys then when he's ready and all the commotion has subsided, he puts himself to bed in his crate. He sleeps about 7-8 hours at night.   Socialization has been a big focus for us. We've done trips to pet stores, quiet, less populated restaurant patios, kids, babies, puppy play time, puppy kindergarten, ocean beach, baby pool, baseballs hats, umbrellas, lawn mowers, thunder storms, outdoor sounds (ocean sounds, thunder, loud music, loud FIFA soccer games, elephant, sirens, crickets, fire pit sounds, owls, tigers...we have fun with spotify soundscapes) and any other sounds we can make around the house. Lots of strangers approach on walks (how could they not?!) and we're doing okay to keep 4 paws on the floor when they do. Still working on it. We've also been very vigilant about brushing & combing his fur so he's ready for his spa day with the groomer. He doesn't love to be combed then brushed but we do it after a nap when he's a smooshball and it feels like a little massage. We've (fully enjoyed) playing with his little paw pads and touching his feet. We make sure to look in his ears and clean around his eyes for goopers. We are slooowly working on teeth brushing...little by little he's getting used to our hands being by his face/mouth. Our vet provided us a nice video on how to slowly introduce toothbrushing with positive reinforcement. (https://www.youtube.com/watch?v=lD--5ViaH-0)  There have been 3 puppy kindergarten sessions and 3 in-home trainer sessions. We're walking nicely on a leash...most of the time. Definitely still working on it! Biting is still a struggle point but as you guys know (and told us) getting his energy out is a big part of it and we've gotten some tips from trainers and continue to work on it. He's not biting on our pants/feet as much which is progress!" "Finley is sleeping through the night! We just went to our first puppy kindergarten yesterday and we've had 3 at-home training sessions so far. He's doing well with fetch. He's got sit down-pat. Doing pretty well with 'come' & we're working on 'down.' He's getting bigger!!" 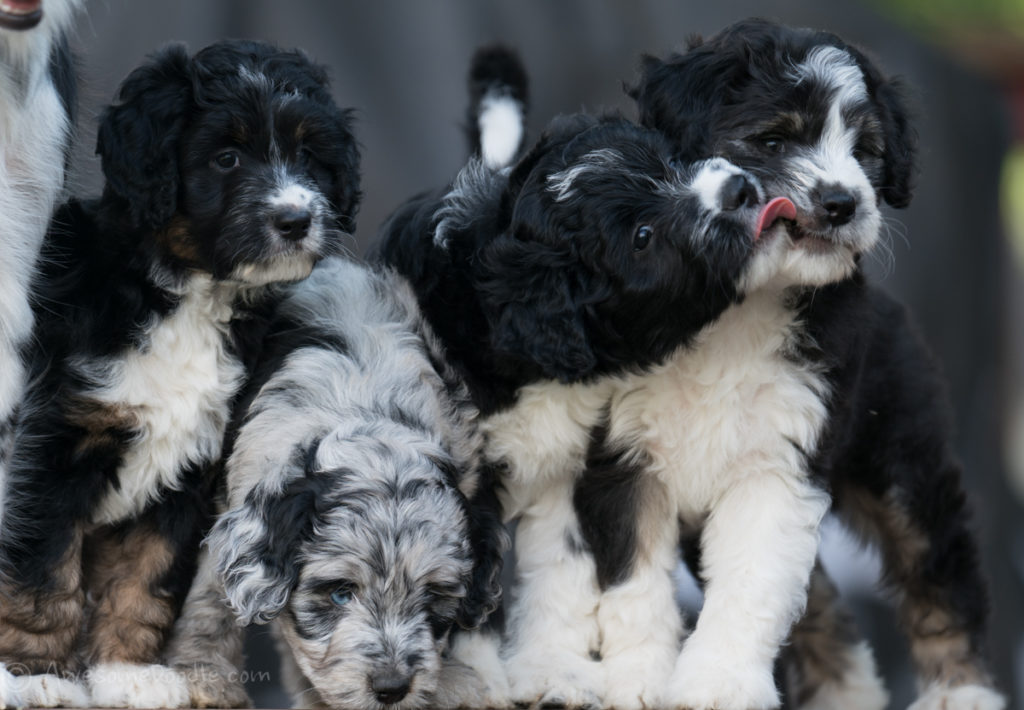